Fun Factory’s Manta is awesome. But it could stand to be stronger. And cheaper. And have less dumb buttons. 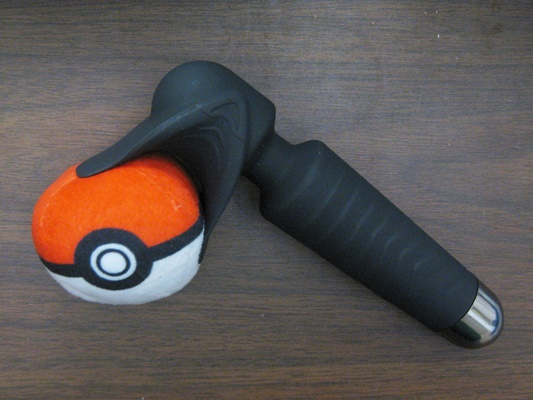 It’s stronger. It’s less expensive. And its buttons are dumb in different ways.

I use the Man Wand in the same six ways I use Manta, which I discussed in my review of that toy. But it also provides a seventh use case:

Unlike Manta, you can turn the Man Wand around to find a broad side for clits. 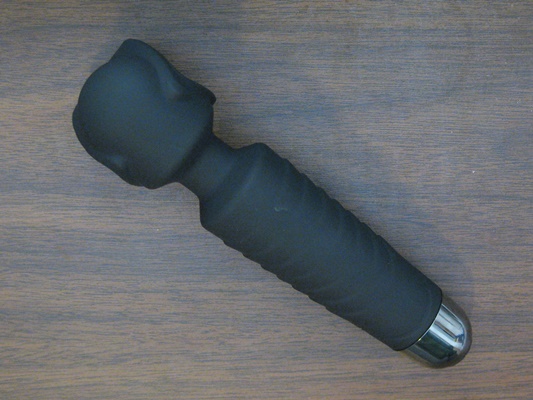 But comparing them with Manta’s wings, they could use improvement. 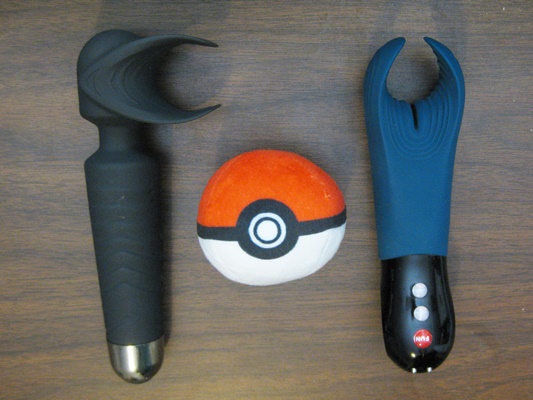 The Man Wand’s wings are a little shorter than Manta’s, so they reach around less of my penis. They also don’t curve as much, so, even though Manta barely squeezes me at all, the Man Wand squeezes me even less.

Hell, I think it would be a good idea for the wings to be so long and so curved that they overlap. They’re soft enough that this wouldn’t make fitting difficult, no matter the size of the penis.

Which brings me to sizing. The space between the Man Wand’s wings has a diameter of 1 ⅜”, wider than Manta’s 1 ⅛”. This extra space is unnecessary. The wings are more than flexible enough to accommodate any penis, so all this does is prevent the Man Wand from giving me even the slightest squeeze. 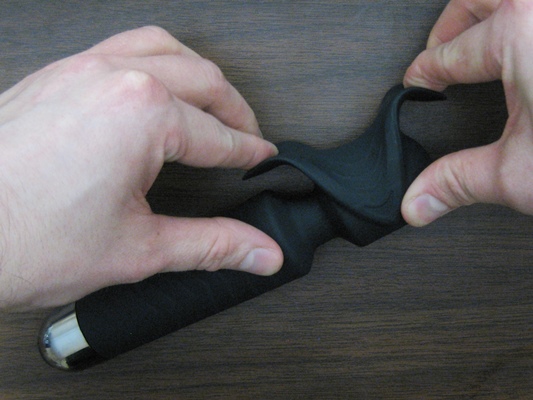 Despite their flexibility, the wings are also slightly firmer than Manta’s wings. This isn’t a big deal in use, but it’s one of the little things that makes me favour Manta.

The Man Wand has a powerful motor. Considerably stronger than Manta, it packs a lot of punch for a toy that’s only 7 ¾” long.

I wish the vibes were rumblier, deeper. It’s not that they’re buzzy and merely on the surface: They simply can’t match the rumble of Fun Factory’s Manta.

If you get the Man Wand and don’t have much experience with vibrators, you’ll think I’m crazy. You’ll think the Man Wand’s vibrations are plenty deep and rumbly.

And you’ll be right.1

The difference is between good and excellent. The Man Wand’s degree of rumble is good, while Manta’s is excellent.

Thou shalt never cease to vibrate, even briefly.

The Man Wand breaks this commandment. With Every. Single. Pattern.

About four patterns still manage to be enjoyable, since their pauses are so short they’re imperceptible in use. Like machine gun fire, but arousing rather than terrifying.

Now try to find these four amidst the ocean of 20 patterns.

Which brings us to the second commandment:

The 2nd commandment of vibe patterns: Thou shalt limit thyself to 5 patterns, *maximum*.

(Because seriously, no one wants to cycle all the way up to vibe function #11.) https://t.co/BoUon7DRow 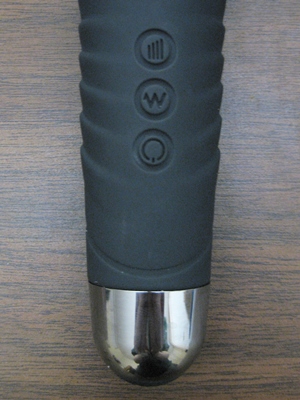 To turn on the Man Wand, tap the power button, which is… Where is it? No, that can’t be it: That feels like the rest of the handle. A button is supposed to stick out and have a defined shape. Is that it? No, that doesn’t feel like a button, either….

Finding the buttons by feel is a chore, but thanks to the shallow moats around them, you can do it. Because they don’t stand out from the rest of the handle, I often waste a couple seconds fumbling for them. Raised buttons are a centuries-old innovation, but the people at Man Wand managed to miss the memo.

When you hit the power button, you always begin at the highest of eight steady, unpatterned intensities. Unfortunately, it doesn’t remember the last intensity or pattern you used.

The pattern button does exactly what you’d expect: It cycles through all 20 patterns, then returns you to steady vibration. Accidentally cycle past your favourite pattern? You’ll have to hit the button 20 times to return to it.

But the real problem is the intensity button.

Many vibrators only have one button to control intensity. You hit it to increase intensity, then, at the highest level, you hit it again to return to the lowest level.

It’s frustrating to have to cycle through all the levels when you want to decrease intensity, so the Man Wand attempts to improve on this design: When you reach level eight, hitting the intensity button will take you to level seven, not level one. Keep hitting the button to decrease intensity, then, at level one, hit it again to go to level two. Like walking up and down a flight of stairs, though you can’t change direction in the middle.

Unfortunately, this design doesn’t solve the problem it sets out to fix. Sure, it’s possible to hit the button to decrease intensity—but only half the time. The other half of the time, you still have to cycle through a bunch of levels you don’t want in order to reach the one you do. And now, unlike before, you also encounter this problem half the time when you want to increase intensity.

Furthermore, when I haven’t adjusted the level in a few minutes, I forget whether it’s currently set to increase or decrease intensity. So when I hit it again, it surprises me. A button should never surprise you.2

This design crams two functions into a single button. It would be much better to have two distinct buttons, + and –.

Though the Man Wand’s button design needs improvement, I love one thing about it: I can change the intensity of patterns. Few vibrators allow this, so it’s a breath of fresh air, even though only four of the 20 patterns are worth using.

This may read like a negative review, but I don’t intend it that way. The Man Wand has many small issues, but none of them are a big deal.

However, its two biggest assets—strength and price—are big deals. If either of these are important to you, you should choose the Man Wand over Fun Factory’s Manta. And if you want to learn more about how these toys match up, read my comparison of them.

1. Not only about the Man Wand’s vibes being rumbly: also about me being crazy. But that’s another topic. ↩

2. Are you reading this, Fun Factory? No alarms and no surprises, please. ↩

My thanks to Peepshow Toys for sending me the Man Wand in exchange for my honest review. This post uses affiliate links, which give me a commission if you buy something, but don’t cost you a cent.