I’ve been rhythmically clenching my anus for the last two hours. Each clench coaxes Aneros’ Helix Syn Trident to rub my prostate. 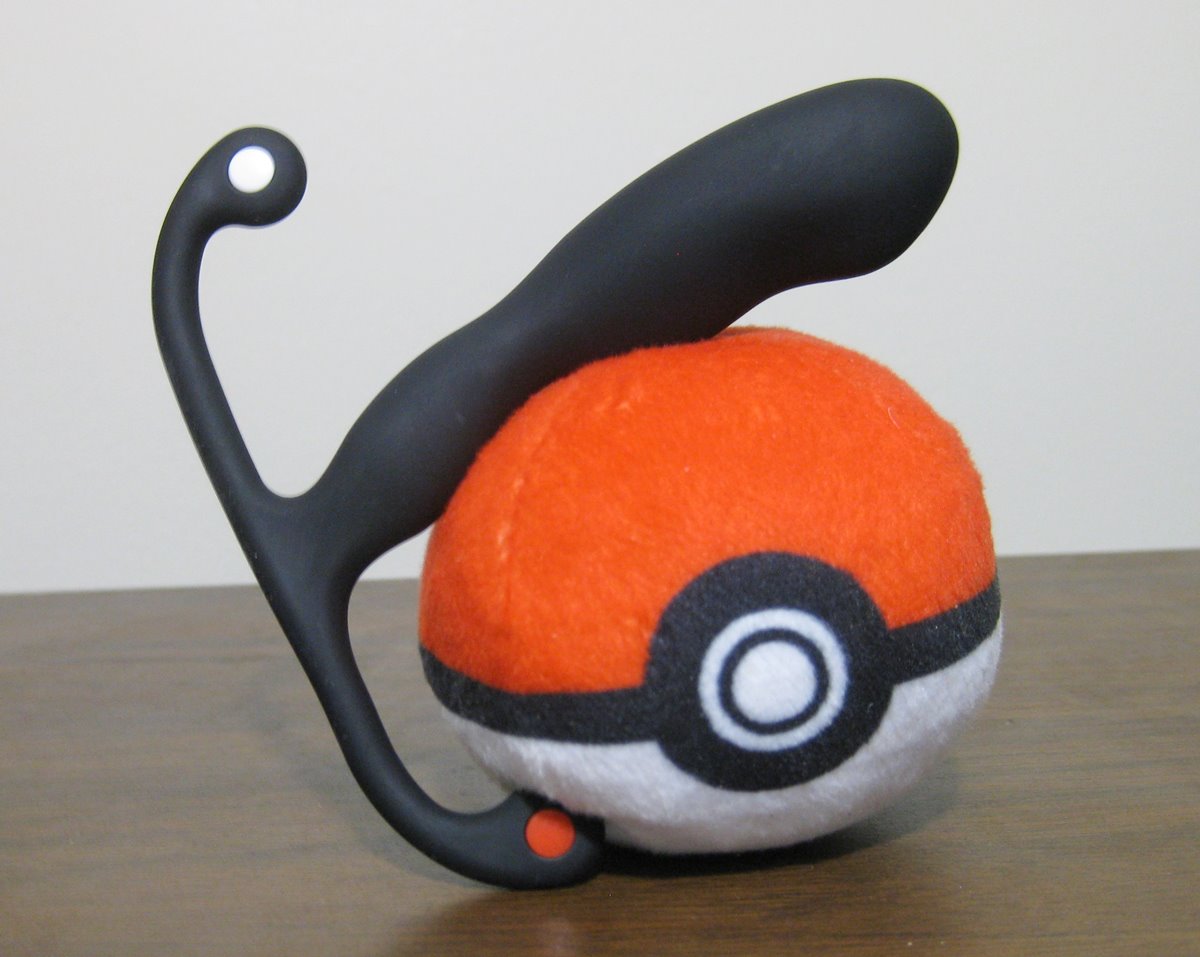 I’ve enjoyed butt plugs and prostate play for years, but this is the first time I’ve tried a toy from the biggest name in prostate plugs. Why did I wait so long?

Because I thought Aneros toys looked small and had subtle shapes. I wanted big, aggressive toys that could pummel my prostate into orgasm.

And I was right. Aneros toys are small. They do have subtle, gentle shapes.

But I was wrong to think these are bad things.

When I first insert the Helix Syn Trident, it feels like nothing. Its thickest part is its top bulb, and it only has a 2 ⅞” circumference. It’s middle bulb measures 2 ⅝” and the modest bulge on its neck is 1 ⅞”. It has a 4″ usable length and its neck is 1 ⅜” long.

This plug is not designed to be filling. It’s designed for prostate stim. This is what it should be judged on.

So I’m disappointed to discover the Helix Syn Trident doesn’t massage my prostate so much as nudge it. A gentle little, “Hey, I’m here,” and nothing more.

Small and subtle and boring. I go wash the dishes, deciding I’d been right to eschew Aneros.

Did I just feel pressure on my prostate? Nah, it can’t be. This plug isn’t capable of that.

Another ten minutes and I pause again.

That was not subtle. That was real pressure this time.

The longer I wear the Helix Syn Trident, the more intense it grows. What felt like nothing in the beginning is now a deep massage. Like it’s slowly cajoling my prostate to come out and play. 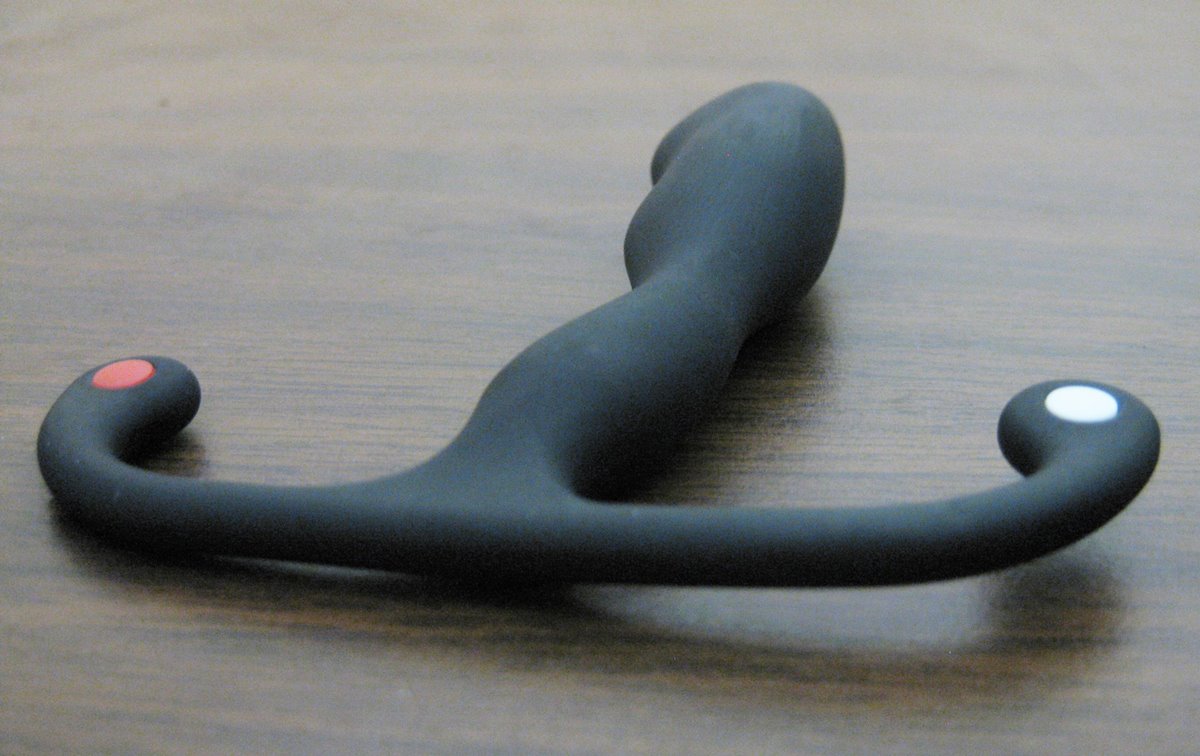 And then I clench.

The Helix Syn Trident’s head rubs my prostate, providing another jump in intensity. But a second later, it settles back to its less intense resting position.

It’s as though a finger is massaging my prostate. Yet I’m standing in the kitchen, fully clothed.

I clench again, but this time I hold it, not letting my anus relax. My hips reflexively buck and I recall how I dismissed Aneros as too subtle.

Rhythmic clenching and sustained clenching are both great ways to play with the Helix Syn Trident. The former feels like finger rubbing back and forth, while the latter feels like a finger pressing hard and holding steady. I love to use both methods, mixing it up, varying how long I clench.

I’ve been holding the same half-clean pan for the last five minutes. The more the Aneros massages my prostate, the hornier I get.

Screw the dishes. They can wait till after I screw myself.

As I climb toward my crescendo, the Helix Syn Trident delivers progressively more powerful thrills to my prostate. My muscles clench of their own accord, maximizing prostate pressure, and I have my most intense orgasm in months.

You’ll be fine for awhile. You may begin to believe you’re immune to its power.

Then, perhaps ten minutes later, perhaps a couple hours later, you’ll get hard and you’ll have trouble steering your mind towards anything but sex. There will be no turning back.

This is a point of divergence from most butt plugs. I adore regular plugs, but I can wear one for hours without getting the slightest bit aroused. Without prostate stim, wearing a butt plug feels like getting a gentle, persistent massage. Relaxing rather than arousing.

The Helix Syn Trident may feel this way at first, but don’t be fooled: It’s a slow-motion aphrodisiac. Do not pop it in and expect to be able to, for instance, write a review and not have to pause several times to relieve the tension.

This plug has a curious neck: It bulges. 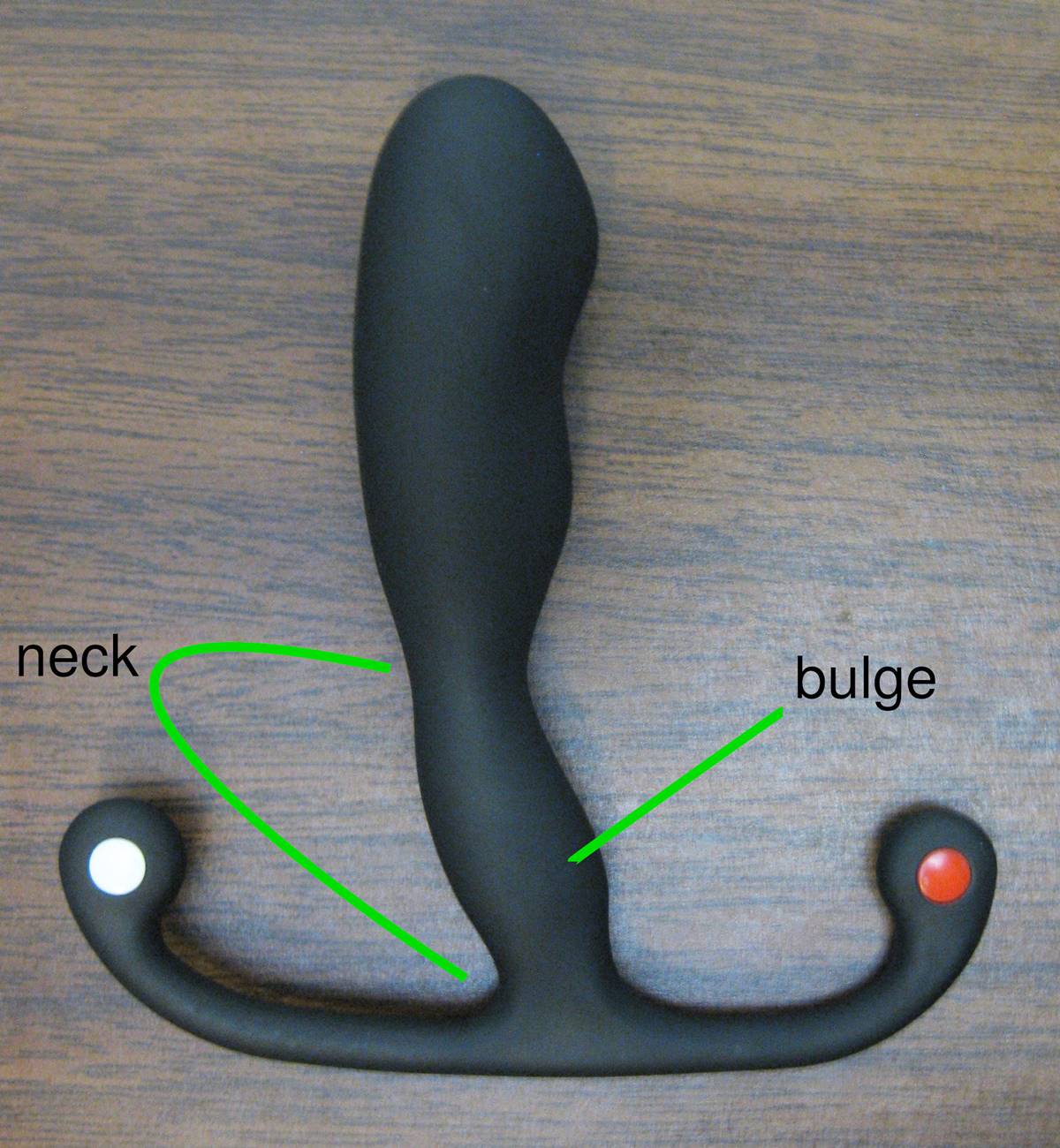 Yes, I’m sure this whole 1 ⅜”-long section is the Helix Syn Trident’s neck because this is where my sphincters sit. That tiny space below the bulge is nowhere near long enough to fit anyone’s sphincters.

Nearly all plug necks are either straight or have concave curves. A convex bulge is eccentric, heretical. As a connoisseur of butt plug design, it draws both my ire and my intrigue.

It’s possible the bulge aids clenching. Perhaps when I squeeze my anus, having a little extra thickness in the right spot lets me push the tip harder against my prostate. This is a theory and nothing more. If you have any expertise in engineering, I humbly accept your eye roll.

It’s also possible my sphincters sit entirely on the upper end of the neck. This would mean that, in practice, the neck is concave rather than convex.

But this speculation doesn’t matter beyond my curiosity. Because I can’t feel the bulge. It causes no discomfort, no retention issues, nothing.

It looks different from other plug necks, but it feels the same. My eyes have questions, butt my butt is chill, just enjoying the prostate massage. 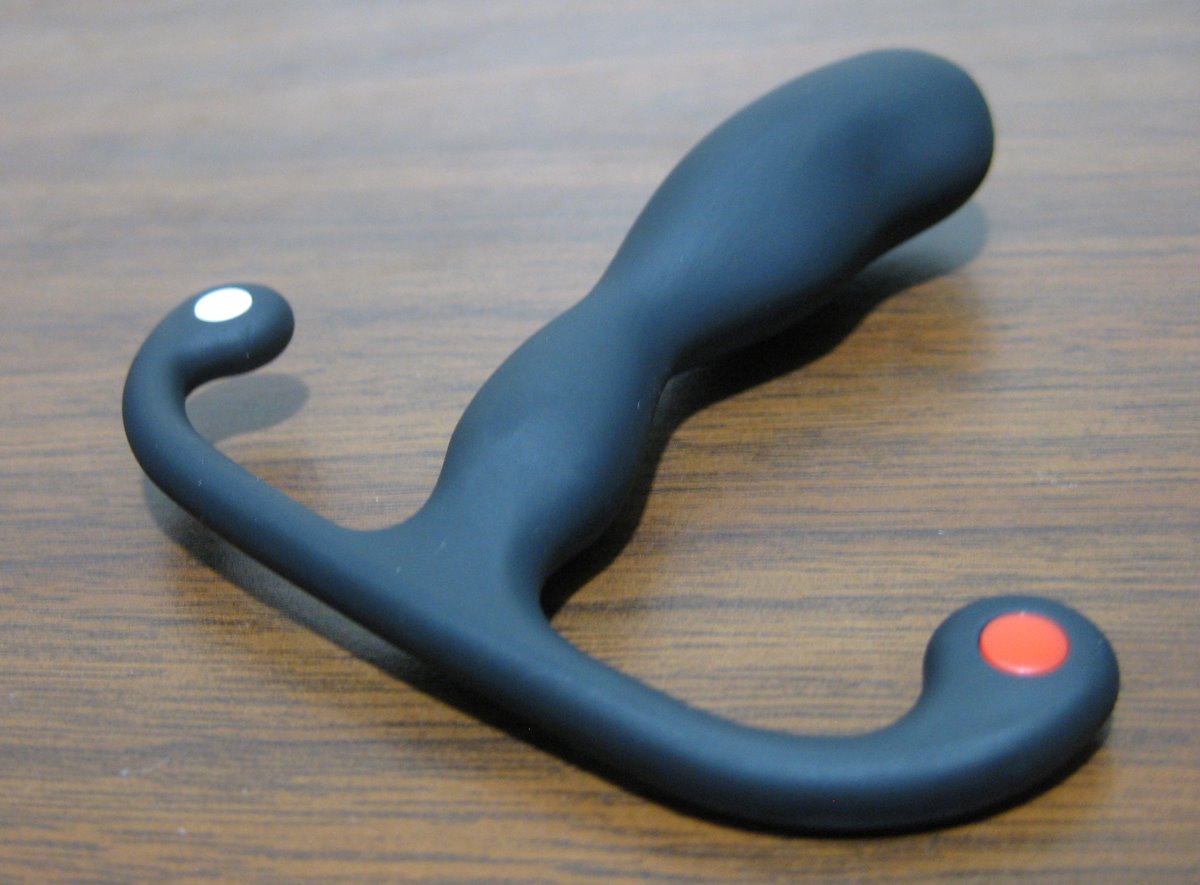 I expected the horned tips on the Helix Syn Trident’s base to be uncomfortable. I expected them to jab into me and annul any joy the plug provides.

Aneros calls the front horn the perineum tab and the back horn the kundalini tab. They’re supposed to provide pleasure, not vexation.

Both I and Aneros turned out to be wrong. The horns do not jab and they do not massage.

They do not do anything.

Like the neck bulge, it’s a design element I thought would matter, but doesn’t. The silicone in the base’s horns is too bendy to press into me and make me notice it.

However, Aneros has two other versions of the Helix and their bases may be more noticeable in use.

The Helix Trident is just like the Helix Syn Trident, except it’s made of ABS plastic rather than silicone. You’d expect this to make the Helix Trident more rigid and thus more effective for prostate stim, but it’s Syn brother is already very rigid.

Because Aneros’ Syn toys aren’t merely silicone. They also have very firm cores to prevent them from bending.

This is a novel application of dual-density construction. Most companies use it to make toys that feel soft, yet aren’t floppy. But Aneros uses it to take silicone that’s already firm and make it even more rigid. Because when you’re massaging your prostate, rigidity is your best friend. A floppy toy can’t do the job well.

The firm core, however, does not extend into the t-bar base—and I’m glad it doesn’t. The bendiness of the Helix Syn Trident’s base is the reason I can’t feel the horns. Perhaps Aneros is correct and the rigid horns on the regular Helix Trident feel good, but I wouldn’t bet on it.

So Aneros’ Syn toys provide the silkiness of silicone without sacrificing the rigidity of their ABS plastic toys. Except in their bases, where I welcome the extra bendiness.

The other doppelganger is the Helix Syn. Like the Helix Syn Trident, it’s made of dual-density silicone. But its base has a pull tab.

The point of this pull tab is to let you slot a finger in and pull it to boost the pressure on your prostate. But I can do this easily with the trident base, too. A full-on finger loop isn’t necessary.

The pull tab may also interfere with sitting. I could be mistaken, but it looks like it may stick out far enough to push against your chair, depending on the size of your booty.

I know what you’re thinking: For such a small toy, Aneros’ Helix Syn Trident is expensive.

You’re right, it is. Which is why you may want to check out Doc Johnson’s Mood Naughty 2. It’s the cheapest prostate plug that looks fairly well designed. It even comes in multiple sizes.

But there are a couple good reasons to favour the Helix Syn Trident.

First, the Mood Naughty 2 doesn’t have a firmer core. So it will bend a lot more than the Helix Syn Trident, preventing it from delivering as much pressure on your prostate.

Second, Aneros puts much more time and effort into their designs. The Mood Naughty 2 certainly looks competently designed (which isn’t true of many, many toys), but Aneros has been refining their designs for over twenty years. The three Helix models I’ve talked about in this review are all iterations on a single model, and Aneros has many other models. They’ve been consistently improving their prostate massagers for a long time, and this is evident to me as I wear my Helix Syn Trident. The Mood Naughty 2, conversely, will probably never see a version two, so if it has any flaws, they won’t be ironed out. (The 2 in its name isn’t a version number. It’s to distinguish it from the Mood Naughty 1, which is a traditionally shaped plug with a taper.)

However, if paying the premium for an Aneros toy isn’t in the cards for you, I don’t know of a better budget alternative than the Mood Naughty 2. It may not be quite on the same level, but it looks like a great toy for the price. 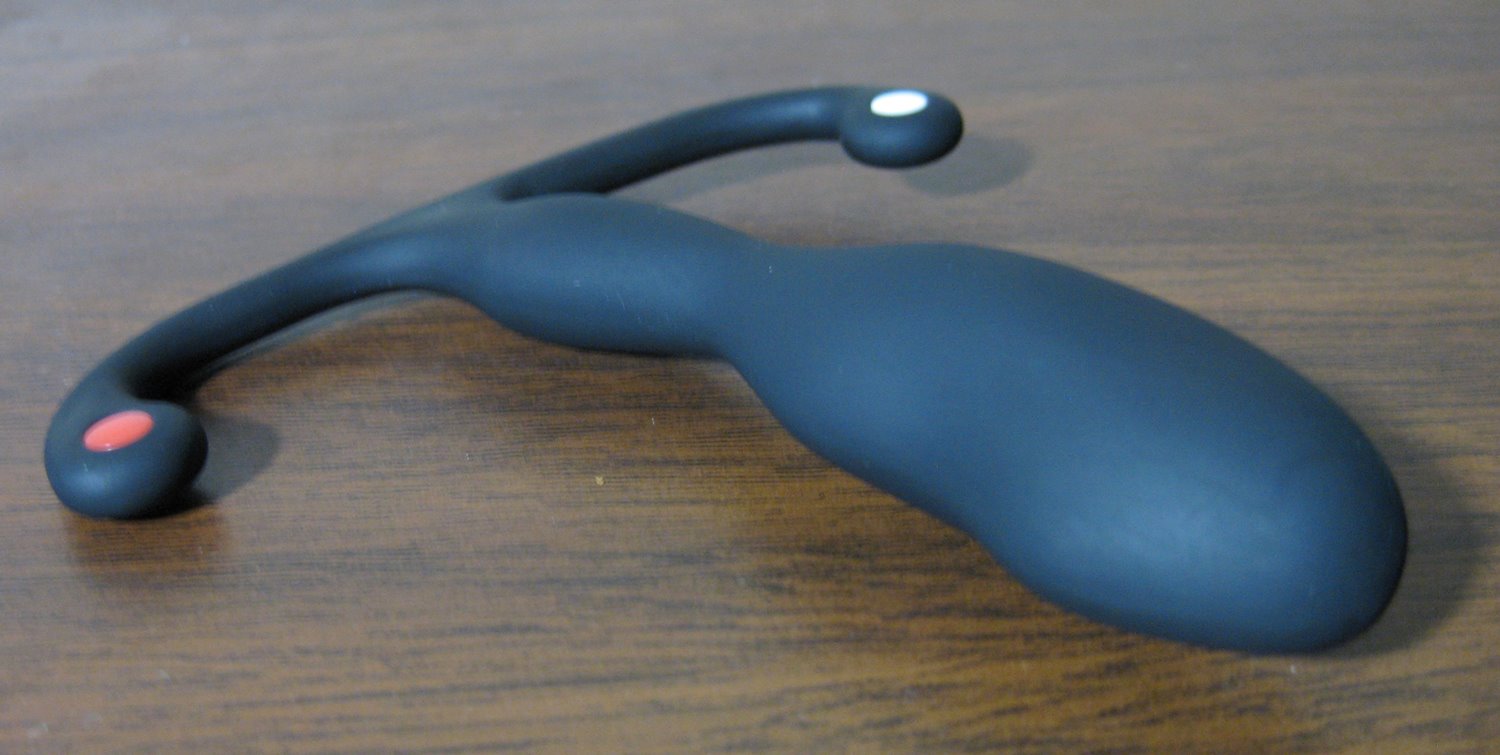 Happy to Be Wrong

I was wrong about Aneros. I may enjoy bigger, more aggressive toys, but an expertly-crafted small toy still brings me to my knees. The Helix Syn Trident is a top-notch prostate massager that makes everything better when I’m wearing it, whether I’m washing the dishes or having an orgasm.

It’s not cheap, but it’s worth it. And if you do need a more cost-effective prostate plug, the Mood Naughty 2 should provide a great value.

My thanks to Peepshow Toys for sending me Aneros’ Helix Syn Trident in exchange for my honest review. This post uses affiliate links, which give me a commission if you buy something, but don’t cost you a cent.