One two three four five and, if you’re brave enough, six. That’s how many uses I’ve discovered for CalExotics’ highly versatile Weighted Lasso Ring, which TooTimid sent to me. And you thought this was just one toy. 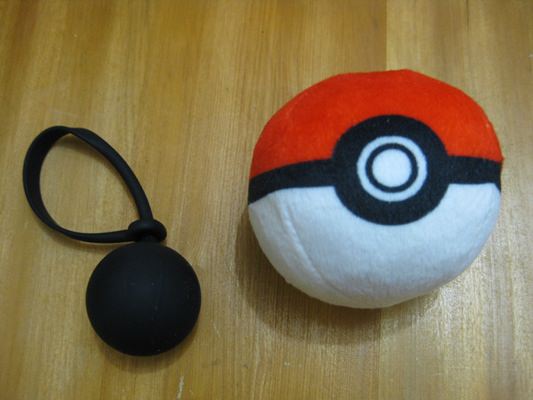 This is how most people will use it, the way CalExotics intends. Simply get hard and stretch the silicone ring over your penis and balls.

Think this will be difficult? Think again: 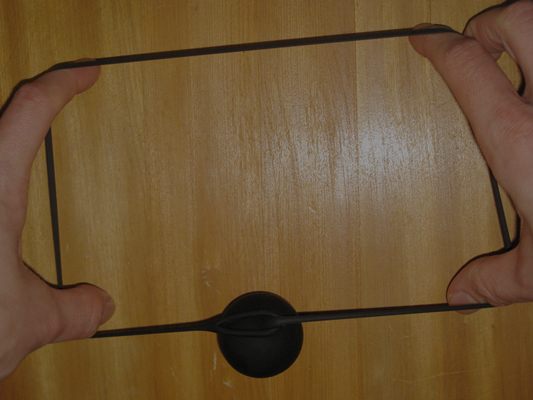 This cock ring can really stretch. Unstretched, it has a maximum internal circumference of 5 ¼”, but I can stretch it over my head.

This can be either a blessing or a curse. The stretchiness makes it gentle, accommodating. But not everyone wants gentle. The Weighted Lasso Ring is designed as a beginner cock ring: Tight enough to give you a taste of the sensations cock rings can offer, but not tight enough to satisfy anyone who’s used a cock ring before.

(If the stretchiness has you thinking this toy is a waste of time, sit tight. We’re still on use #1. This will soon prove to be an asset.)

You’re wondering why I haven’t mentioned the weighted ball yet. Shouldn’t it pull down on the lasso, making it tighter?

Yes, it should. And it does, a little bit. But it’s only 4 oz. (110 g). That’s not nearly enough to counter the lasso’s high elasticity. The weighted ball isn’t even heavy enough to dangle. It’s rests snugly behind my balls, feeling interesting rather than stimulating.

In it’s default configuration, the Weighted Lasso Ring bores me. It should be heavier and more rigid.

We need to get creative.

Batteries and an Earphone Case

Who said the weight is limited to 4 oz.? 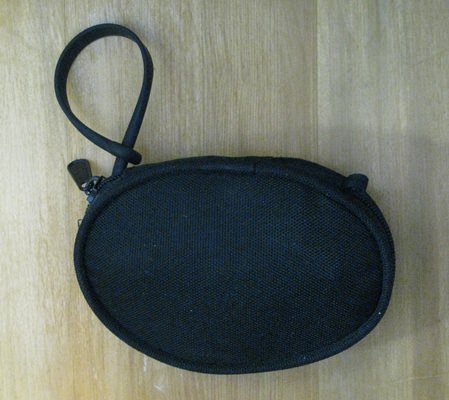 That’s the Weighted Lasso Ring peeking out of a zippered earphone case stuffed with batteries. Three 9Vs, a couple AAs, and half a dozen AAAs. That’s more like it.

In this configuration, the earphone case dangles about 1 ½” below my balls. At last, the lasso tightens.

But not a lot.

After more than tripling the weight pulling down the lasso, this is still a beginner-level cock ring. It’s tighter, absolutely. But not tight enough to restrict much blood flow.

And then there’s the bundle of batteries swinging between my legs like a wrecking ball. It feels as weird as it sounds.

But maybe that’s just me. If you want a beginner cock ring that lets you adjust how much weight hangs from it, this can be a fun configuration. For everyone else, there are other ways to use this toy.

Let’s face it: This silicone is too stretchy to encroach on the territory of intermediate-level cock rings. But ball stretchers don’t need to be tight.

Slide the Weighted Lasso Ring over your balls, leaving your penis out of the loop. The weighted ball will dangle about 1”, providing a nice stretch. I complained that 4 oz. is too light, but when using the toy as a ball stretcher, 4 oz. is plenty.

I was concerned the lasso would be so loose it would slip off my balls. But this wasn’t an issue. It didn’t feel tight, but it was more than secure enough to stay in place.

This was my first time trying a ball stretcher: Damn, it was intense. But the real joy came with my orgasm: It was longer and stronger than usual.

I don’t think I could handle using a ball stretcher regularly. But for occasional use, this is really fun.

We have our first winning configuration. But it gets better from here.

Just like when you use the Weighted Lasso Ring as a cock ring, you can use batteries and an earphone case to add weight to it when you use it as a ball stretcher.

And I do mean you. Because I am not brave enough to try this.

If, like me, you’re new to ball stretching, I advise against adding weight. But if you’re experienced in this kind of play, I think it could be fun.

However, there is a variation on ball stretching I was brave enough to try.

The dangling weighted ball got me thinking: Could I stretch it all the way to my ass?

I keep saying this, but it’s the most important aspect of the toy, so I’m going to say it again: The lasso is stretchy.

I was thrilled to discover I could easily pull the weighted ball to my ass and pop it in. It has a 4 ¹³/₁₆” circumference, so it’s not a beginner-level plug, but it’s not big, either.

When I first saw a picture of CalExotics’ Weighted Lasso Ring, my first thought was that it would make a great combination cock ring and butt plug. When I got my hands on it, I dejectedly concluded the lasso wasn’t long enough to make this feasible. But after witnessing over and over how stretchy it is, I decided to give this configuration a try.

I had to stretch the lasso more than I did when I used it as a combination ball stretcher and butt plug. But the silicone was more than up to the task.

Stretching the lasso this far provided an extra perk: The weighted ball constantly pushed against my internal sphincter. Not enough to threaten popping out. Just enough to feel delectable. This is the first plug I’ve had that does this. It’s unique and delightful.

The lasso feels significantly tighter than it does when I use it as a regular weighted cock ring. But it’s not as tight as it is with batteries providing extra weight. It’s a beginner cock ring, but it still feels really good.

This is my favourite configuration, the one I’ll be returning to most often. But it’s far from the only good way to use this toy.

My thanks to TooTimid for sending me CalExotics’ Weighted Lasso Ring in exchange for my honest review. This post uses affiliate links, which give me a commission if you buy something, but don’t cost you a cent.